LEAN is thrilled that on Thursday the Labor Party delivered on its promise of real action on climate change.

Bill Shorten announced Labor's energy policy, reiterating Labor's commitment to 50% renewable energy and a country wide emissions reduction target of 45% by 2030.  Read a message we sent to our supporters.

LEAN is thrilled that the Labor Party delivered on its promise of real action on climate change.

Labor's policy also promises to reign in scary electricity prices. One of the key reasons for spiralling prices is a lack of 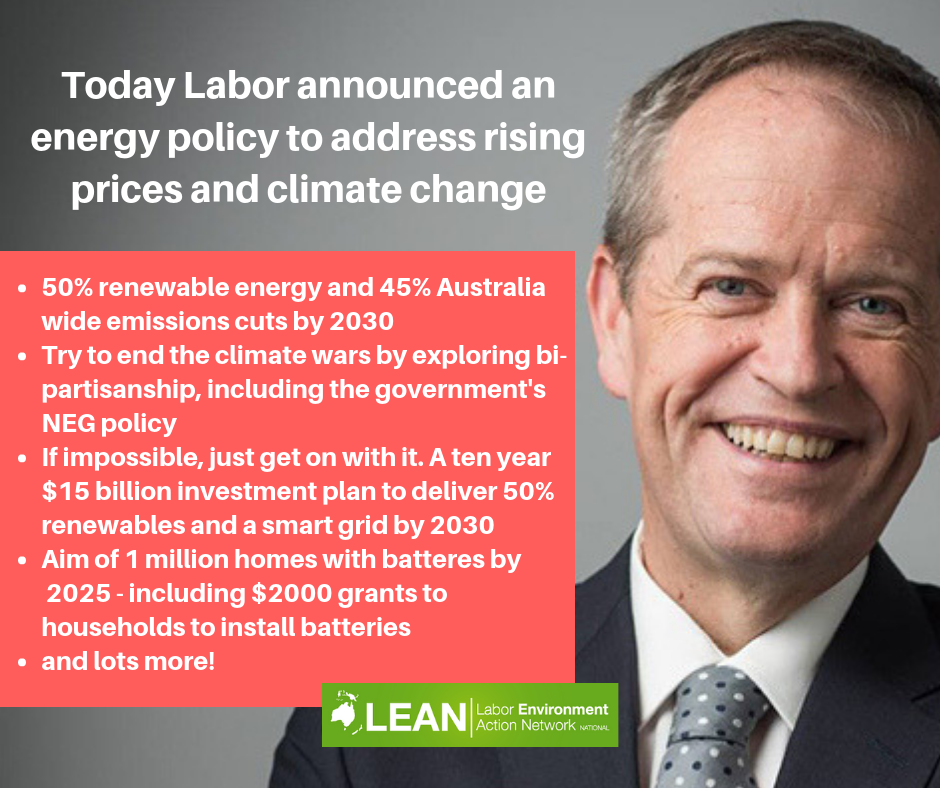 enough supply of electricity. This is having an impact across Australia with people fearing their next electricity bill. Renewables are the most cost effective way to increase that supply and drive down prices.

In an attempt to end the toxic climate wars, Labor is working toward a bi-partisan agreement on the floor of Parliament. Labor is prepared to use the Coalition's proposed NEG (National Energy Guarantee) to do this. After all it is coalition policy, they should support it right? The NEG is a mechanism to account for carbon emissions and reduce them in the electricity system. It's not perfect but Labor could adopt it and simply ramp up the ambition and the targets.

But Labor is not going to allow the far right of the Coalition party or the Greens to stymie climate action in Parliament. If the other parties won't come to the table,  Labor will simply put measures in place to get building with a 10 year investment plan! Labor will look at a variety of tools to do this - underwriting the price of renewables (like ACT, Victoria and Queensland have done), providing finance and even directly investing to make sure we get going on embracing the solar, wind, battery and pumped hydro revolution.

LEAN has long been a big fan of direct public investment in renewable energy. Privatisation of electricity has been a terrible failed experiment. Decisions made by the market have resulted in a system which doesn't provide for the energy needs of Australians or protect our planet.

There is no reason why we shouldn't deal the public back into the electricity system. And these are assets that continue to deliver to the community rather than shareholders in private companies. The Queensland government get more in dividends from electricity assets than mining royalties. That is money that can go toward building schools and hospitals.

Labor will also makes sure we properly plan the electricity system of the future, including the necessary infrastructure upgrades to allow us to build a truly modern, clean and reliable energy system.

Today's announcement is a smart, sensible response to the never ending bickering that has stopped Australia getting on with the energy transition.

Full details are available at https://www.makeourfuturerenewable.org.au