Labor and the environment

Labor's core mission of civilising capital and promoting equality of opportunity began in the late 19th century as a material vision, in which the spoils of hard work would be more equitably shared between labour and capital. This included not only fighting for decent working conditions and reducing income inequity but also collectively, as a society, providing opportunity and improving quality of life.

Today, like then, this most obviously includes providing access to good education and decent health care. Quality of life also relies on other 'common goods' such as a thriving cultural life, social housing, efficient public transport and so on. In the 2010s and beyond ensuring the environment is healthy - that the air is fit to breath, the climate able to protect us, our ecosystems continue to function – is a common good we must provide collectively. Labor's vision must be bigger than a crude material one, recognising our reliance on the natural world, both physically and spiritually.

This fits neatly in the prism of Labor's core values. Environmental decisions are rooted in social justice as it is inevitably the poor who pay most for environmental degradation. They impact economically as smart economies gear up to capitalise on the clean energy future. They have a patriotic face as the beauty of Australia's natural assets remain at the heart of our conception of ourselves and our pride in this place. And increasingly they are central to our survival. Human induced climate change threatens our future. Environmental systems collapse of many forms - including extinctions, water degradation, increasing toxicity - threatens life. The environmental imperative reaches beyond class, ethnicity and gender.

Labor importantly has an ethical tradition where things are fought for and defended just because they are right. Delivering protection for the environment is core business because it is the right thing to do.

LEAN members want to be part of a Labor party that strives to build a fair and comfortable Australia that also defends and protects the environment.

Labor is the political party that has delivered every significant environmental reform in Australia. No other party has consistently acted to protect our natural assets. Now it has started on the path to addressing the catastrophic challenge of climate change.

In 1983 Labor saved the Franklin River from being dammed. Labor protected the Daintree, Kakadu and the Tasmanian World Heritage Area. Labor reformed the native forest industry and protected the most important old growth stands across the country. 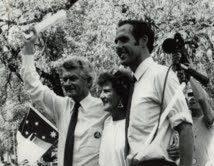 The 2007-2013 Federal Labor Government has built the largest network of Marine National Parks in the world and has set Australia on the path to a low carbon future. It protected 170,000 ha of Tasmania's forests as World Heritage and halted the supertrawler.

While it is these big headline actions that inspire, Labor importantly also embedded environment in our planning processes and built ways to assess, regulate and enforce environmental controls. In the early 70s, Prime Minister Gough Whitlam appointed Australia's second Federal Environment Minister, Moss Cass and the country's first Urban Planning Minister, Tom Uren. Under Whitlam the nation's first Environmental Impact Inquiry established that sand mining on Queensland's Fraser Island was untenable. Embedding environmental outcomes while building the nation and its prosperity were central to Whitlam's modernising of the Labor mission.