LEAN is a grassroots network of ALP members and supporters who: 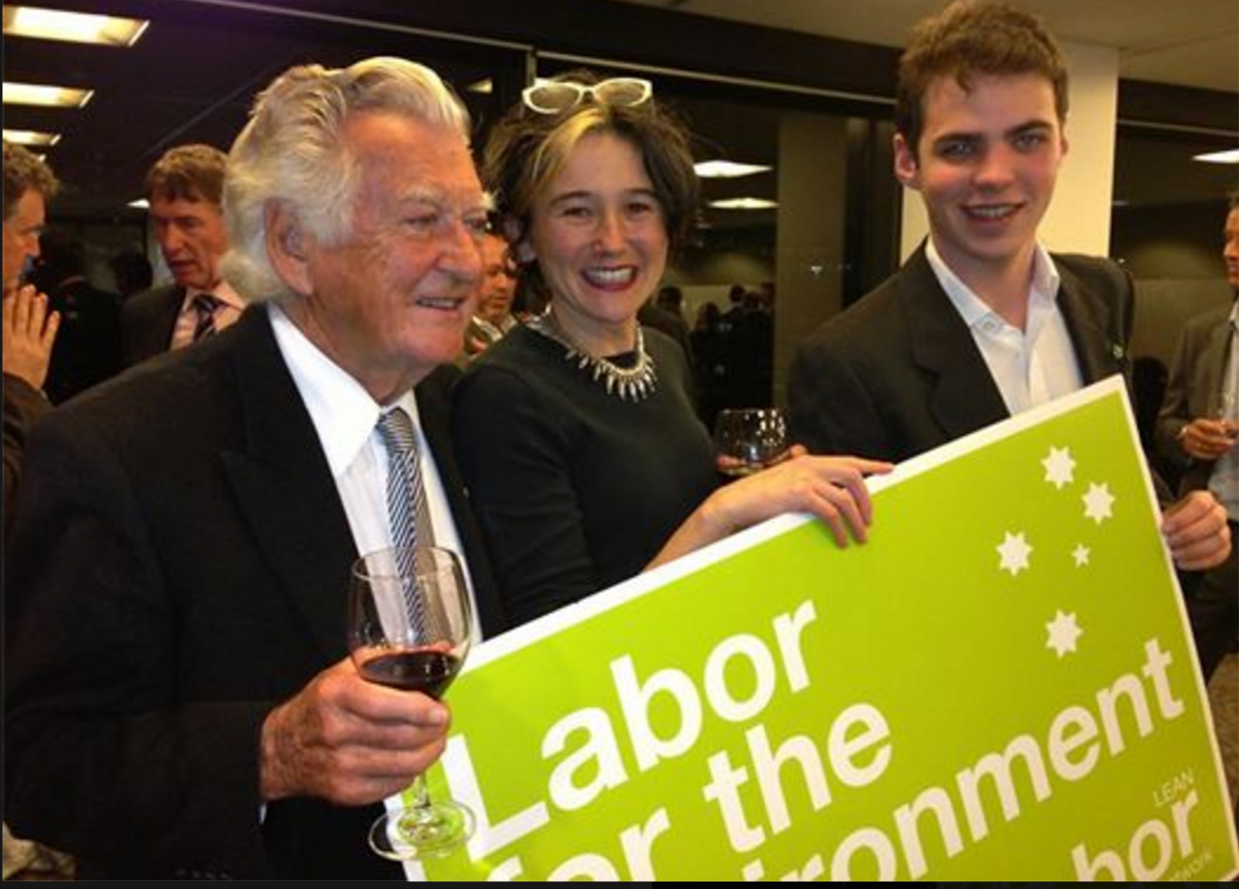 As the Labor Party is organised along State/Territory lines, LEAN also relies on State/Territory based organising. We work together on national issues, through a loose coalition called National LEAN. LEAN also has 15 local groups

Contact your State/Territory convenors to talk about stepping up to make LEAN an irresistible force for the planet within the Labor Party. Find their contacts on the Get Active menu above.

LEAN is an active participant in environmental debate and decision making across the Labor Party. With local groups, state organisations and a National body, LEAN engages across local government, state government and the national debate. Everyday LEAN members advocate with Labor councillors, MPs and the party policy processes to improve environmental commitments from the party.

Nationally LEAN focusses on delivering the fundamental architecture to deliver environment and climate change ambition. In 2015, when LEAN first was rebuilt it campaigned to deliver ambitious climate change targets -  50% by 2030 renewable energy target and 45% by 2030 emissions reduction target. This outcome set the frame for ambition that has led the Australian climate change debate since. The story is below.

In 2018 LEAN once again delivered another breakthrough in environmental policy. With the support of 500 local ALP branches, the ALP Conference adopted LEAN's proposal to rewrite the federal environment laws. The current laws are failing to arrest decline of the environment, including species loss and deforestation. Labor committed to rewrite the failing laws and to create a Federal Environment Protection Agency (EPA) to ensure laws are strong and delivered. Read details of the Laws campaign.

Through out 2014 and 2015, the Labor Environment Action Network (LEAN) ran a campaign across the Labor Party to deliver strong climate change policy.  The following pages remain as a record of some of the campaign materials that informed that campaign. The campaign and its victory is an inspiring story of the power of ordinary 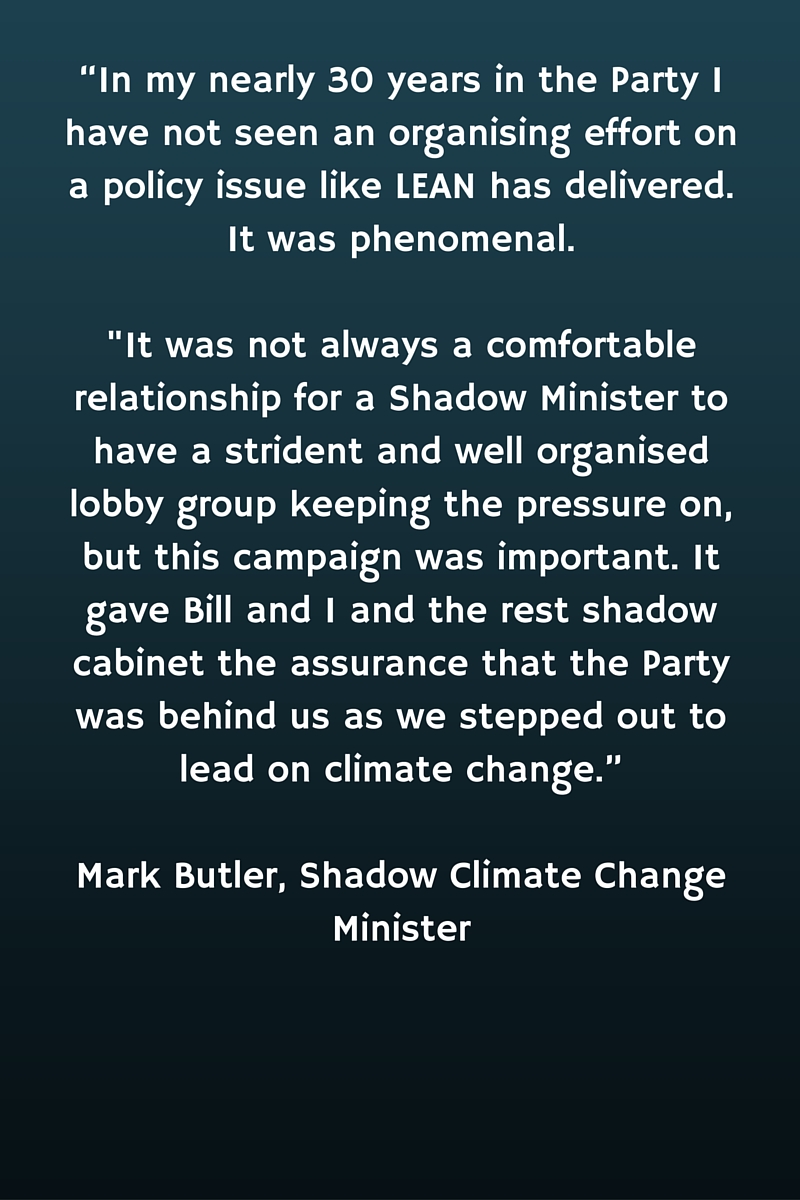 ALP members to change the party and with it, Australia.

The LEAN 50/50 campaign was conceived in the weeks following the repeal of the carbon price in mid 2014. The party was still very bruised from the political fiasco of climate policy in the Rudd/Gillard years. LEAN, as a committed group of party members decided to campaign to put climate policy back in the centre of Labor's policy offering.

We developed a high level policy agenda based on the work of the Climate Change Authority and the modelling of decarbonisation of the Australian economy by Climateworks, based at Monash University. More detail can be read in the attached documents.

The two headline 'asks' of the campaign were:

LEAN volunteers spread across the country and visited local branches and any other party units they could find. LEAN volunteers would give a short presentation on the challenge that climate change poses to the country and the globe. They would then explain the policy proposal and the opportunities that responding could offer the Australian economy. Climate Change threatens everything Labor holds dear - equity, safety and prosperity. The solutions can drive jobs, innovation and investment. This is not just an environmental problem - climate action is core Labor business.

LEAN engaged with the party's policy development processes and lobbied the Parliamentary Party. Our power however came from the 370 local branches of the ALP that supported our position and passed a motion in support of 50/50. The membership of the ALP gave an unequivocal endorsement for strong climate action.

We are an internal lobby group and mainly stay out of the public spotlight, but as Conference approached the story appeared the media.

The Sydney Morning Herald first covered the story when we had 150 local branches signed up to the cause.

A few days before Conference ABC's AM program covered the story, as did the Australian.

A few days before the National Conference of the ALP in July 2015, ALP Leader Bill Shorten committed the party to delivery of 50% of our energy from renewable energy by 2030. This was endorsed unanimously by the Conference. The Conference also committed the Party to adopting, before the next Federal election, pollution reduction targets based on the independent advice of the Climate Change Authority as well as the development of a transition package to protect those communities most affected by the transition away from dirty fuels.

You can read the Platform resolutions that passed in relation to LEAN's campaigns here.  The entire 2015 National ALP Policy Platform adopted by the 2015 Conference can be read  here.

The Conference was a huge celebration of the power of the membership to change the party.

On November 27 2015, as the international Climate Meeting kicked off in Paris, Labor Leader Bill Shorten delivered on the second part of LEAN's campaign, by committing the party to at least 45% pollution reduction by 2030. He went further, also committing the party to delivering net zero emissions by 2050. You can read the speech Bill Shorten gave to the Lowy Institute to announce these policies here.

Labor is now the proud owner of a responsible and effective climate change policy. One that can deliver Australia's part in keeping the future safe for our children. 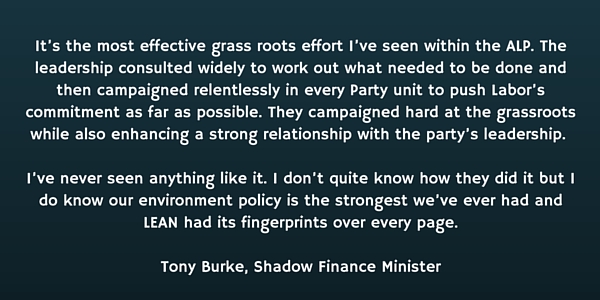