SUSTAINABLE BARGAINING FOR A RENEWABLES FUTURE: EMBEDDING GOOD JOBS IN OUR ENERGY TRANSITION 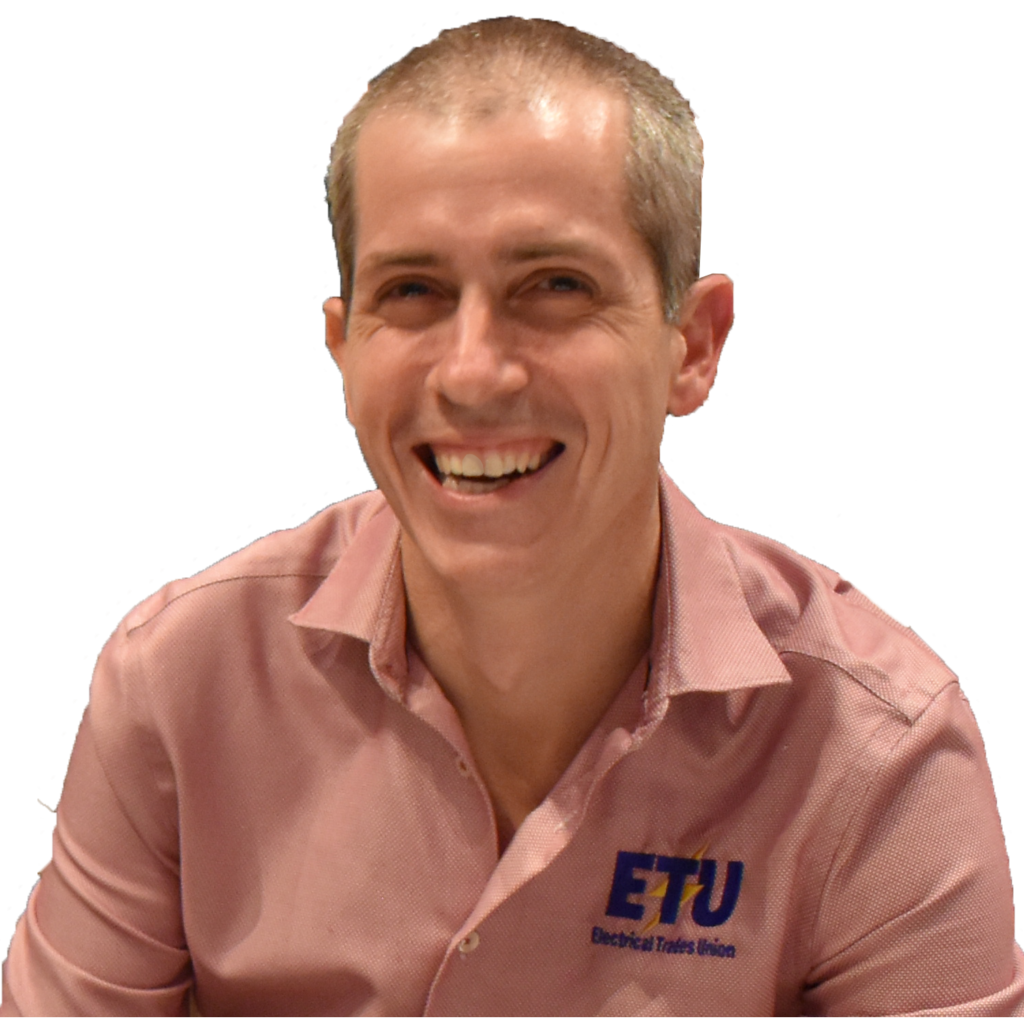 Michael Wright, Acting National Secretary of the ETU, Speech to NSW LEAN Webinar on 29th September 2022.
You can view the full webinar on household electrification and energy efficiency here.
Read the SMH story on the speech here.

Friends, let me commence by acknowledging the traditional owners of the land we meet on today. For me, I am on the land of the Gadigal people of the Eora Nation and I pay my respects to elders past, present, and emerging. I note that Aboriginal and Torres Strait Islander people have a fundamental role to play in our energy transition and welcome the great work of the First Nations Clean Energy Network and the commitment by Governments across Australia to develop a First Nations Clean Energy Strategy.

I thank LEAN for the opportunity to speak with you tonight. As Acting Secretary of the Electrical Trades Union, I am humbled to represent over 60,000 skilled electrical workers – workers who are building our energy future.

Powering Australia is Australia’s greatest economic and environmental opportunity, but also amongst our biggest challenges.

Fundamentally, it must be underpinned by good jobs. But they can only be delivered through major changes to our workplace laws to allow sectoral bargaining.

For too long addressing these intertwined issues of climate policy and industrial relations were seen as toxic third rails of Australian politics.

The dark shadow of the climate wars hung over the revolving door to the prime minister’s office for 15 years. This unprecedented churn stretched from Howard and Kyoto through to the CPRS and ETS under Rudd and Gillard, to the hapless search for an energy policy under Abbott, Turnbull and Morrison.

We must reflect on the key question: why has the climate debate been so destructive? Because too many Australians simply did not see how their future would co-exist with the transition to clean energy. It wasn’t ignorance or stupidity that held us back as a country. It was the need for people across Australia to see a plan that worked for them. Not a vision, not an aspiration; a plan for their economic future.

Labor swept to power in May with a commitment to a strong emissions reduction target. A record number of Greens joined them in the 47th parliament. The emergence of teal independents heralded a historic split in traditionally conservative electorates. There could hardly be a stronger electoral message after more than a decade of division: Australians want real action on climate change.

But what that means is more complex than any target or goal. The true magnitude of what lies ahead is becoming evident as we grasp what is possible and indeed, needed, to power Australia.

Australia is facing the biggest industrial revolution in its history. We are in the midst of a historic transformation of how we generate, distribute and use energy. The direction is unambiguous. Twelve coal-fired power stations have closed. Renewable energy accounts for roughly a third of electricity generation. There are not enough electric vehicles coming into the country to meet demand. And then there’s the quietest part of the revolution - households’ rapid move to electrification, not just with rooftop solar and batteries, but with induction cooktops, heat pumps, and split cycle air conditioning.

While the trend is clear – the scale remains immense. Currently renewable generation constitutes around 5% of all energy use. The CSIRO estimates that over the coming decades that will explode to 75% with the balance largely made up of hydrogen. Reputex estimates over 600,000 additional jobs will be created through Powering Australia. Plainly, there is a lot of work. But work is only one part of the equation - it took a lot of work to build the pyramids, but the site allowance wasn’t great.

Social licence is key to keeping the Climate Wars dead and buried. But that social licence can only be delivered if this quiet industrial revolution is characterised by decent and secure work, which provides opportunities for the future.

Our industrial relations system is failing. There is across the board acknowledgement from employers, unions, and governments that – after a decade of a dramatic shift in how we work – the Fair Work Act’s bargaining system is broken.

The key failure of enterprise bargaining is that it is premised on a model of fixed workplaces with a single employing entity – where negotiating for months or years is acceptable because it will all work out in the wash. This model simply doesn’t align with the realities of the modern workplace.

To take the example of a solar farm: commonly the build time is 6 months. If bargaining commences immediately, the first meeting is held ASAP, agreement in principle is reached at the first meeting, writing the entire agreement takes only a week and it’s then put out to vote, and it if it then sails through the FWC – then maybe workers will get the benefit of that agreement for about half the job. In reality, bargaining takes time.

Instead, in the regions “renewables” has become a dirty word – synonymous with low-paid, casualised employment with poor conditions, low quality and no apprentices. Workers may work building renewables for years but, because of the routine change in employers, never be able to have a say in their workplace.

Employers ask, how can it be otherwise? The job is too short. The answer is clear: while that job may be too short - and any one project may not have scale - at the sectoral level there is no shortage of work, and certainly no dearth of opportunities for training.

But bargaining at the level of individual projects won't get us anywhere.

In a different context, there are 1.8 million homes in Melbourne that may need to be fully electrified – with EV charge points, induction cooktops, air-conditioning and heat-pumps. In this sector of suburban contractors and smaller operators, of feast or famine contracts, parties do not have the resources to commit to day after day of negotiation, legal advice, and Fair Work hearings. Everyone is already stretched too thin.

By limiting bargaining to the “enterprise”, the Act forces us into a one size fits all approach.

So what is the solution? Should we ditch three decades of bargaining reform and return to centralised wage fixation? No. We need workplace laws fit for today and tomorrow, not a 1950s or 2010s economy.

The gig economy is the perfect example of workplaces evolving faster than laws. Put simply, we won’t be able to execute Powering Australia without workplace laws that keep pace with reality.

We need workplace laws that facilitate bargaining at a level that makes sense. In some places, that will be at the so-called “enterprise” level, in others it will be broader. The parties must be given the trust that they can figure out which level works best for them.

So if we had this new system, what would it mean for Powering Australia?

For renewables and for electrification, it would mean that agreements could be struck across a region covering multiple employers all performing the same work. It would mean that workers, unions and employers would finally be able to come to the table together to establish the workplace framework. Would we seek good wages and conditions – of course. Good wages and conditions are fundamental to maintaining the social licence.

But more than that, we can develop plans for apprentice training, ensuring young or reskilling Australians can be rotated through different employers to get the education and experience they need. We can map out ongoing employment opportunities, to ensure that skilled workers aren’t lost as one project finishes whilst another one begins. We can promote local opportunities to ensure the benefits of this boom are shared fairly. We can address the sleeper issue of why we have had a “temporary” shortage of electrical workers for thirty years, and yet less than 3% of those workers are women – if only we had another gender to call upon. And most importantly, we can simply get to the table and figure things out – the issues which no one foresaw and which can’t be regulated away.

Powering Australia is Australia’s energy future. But to get us there, we can’t fall into the trap of rejoining the tired camps of climate “believers” and “deniers”.

Australians need to know that there is a plan for them. A plan that means well-paid long-term jobs with good conditions. A plan that makes power cheaper for all Australians. A plan that helps us meet our international obligations on climate change and the steep environmental challenges the world faces. With a good jobs agenda driven by those doing the building, we will capitalise on the greatest economic shift of our lifetimes.