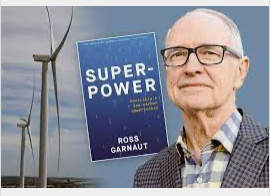 "The emphasis on gas is misplaced. We are not going to have globally competitive prices for gas. We could have had it with the export reservation, but the government doesn't seem to be enthusiastic about that."

I'll go to questions from the audience. Now the first one is from Darryl Fellow. He says the government seems intent on a gas led recovery, which seems to be largely a subsidy to the gas industry. And their argument is renewables probably don't need subsidies. What would your alternative priority areas be for spending the money that the government intends to spend on expanding gas?

The emphasis on gas is misplaced. We are not going to have globally competitive prices for gas. We could have had it with the export reservation, but the government doesn't seem to be enthusiastic about that. And if we don't have globally-competitive prices for gas in eastern Australia, then we're not going to have new investment in gas export industries, processing industries based on gas. So it's simply economically not feasible to expect much in the way of investment and gas.

And in the new world that's emerging a very strong commitment to zero emissions, the fact that gas is not a zero emissions industrial feedstock or fuel, counts strongly against it. Sure it's better than coal - half the emissions if you burn it for electricity of coal - but still high emissions, unless you capture the carbon dioxide emissions and take them out of the atmosphere permanently. Now, you can do that technically. And I think we should be looking at doing everything we can to do that, exploring those technologies. But it's not going to be cheap. And so it's not going to be competitive with zero emissions manufacturing. So it's not a path to the future.

There might be some niches where it's important, and let's use those, but it's not going to be a big story.

So for all those reasons, emphasis on gas as a base for recovery is misplaced.

….....The US has said that it will commit 1.7 USD trillion to the zero emissions transformation. Scaling that back on a per capita basis, you know, that's 50 billion or more a year, in Australia over the next few years. What we're putting into support for the new industries for innovation is trivial compared with that.

I just saw an announcement in France, the French government is going to make a major commitment towards supporting the first hydrogen based zero emissions iron processing in France. Well, economically for the world as a whole, much more efficient for that to be in Australia. But if the French government is paying for the innovation, and the Australian Government is not, then it'll happen in France. So the very first thing I would do is make sure that we've got support, fiscal support, for innovation comparable with what's going on in France, in Germany in Britain, in Korea, Japan, China, the United States, Canada.