Labor Leadership Vote: Where do Albo and Bill stand on the environment?

The Labor Environmental Action Network (LEAN) took the opportunity to put a series of questions to the two Federal Labor leadership candidates, Anthony Albanese and Bill Shorten. As Labor people who have a passion for seeing the environment at the forefront of policymaking, we were very keen to hear the views of both contenders on the key environmental issues in Australia and we were delighted that both Anthony and Bill replied very promptly with considered and thoughtful responses. 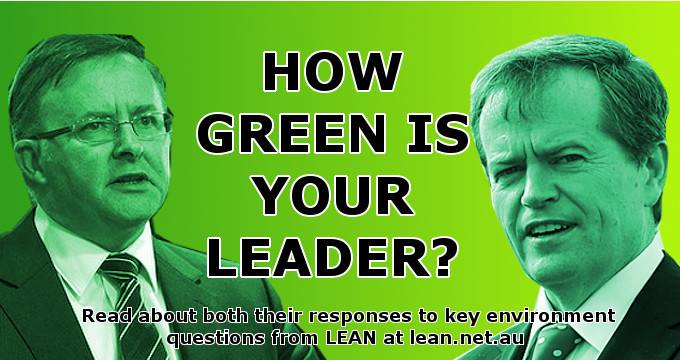 September 30, 2013
Both Bill Shorten and Anthony Albanese have responded to a set of LEAN questions on environment policy and commitment. Read their full responses here.

And read about it in the Guardian

Their detailed responses are available here for the consideration of Labor Party members but we would like to highlight those key issues where there is common ground:

LEAN does remain concerned though that neither chose to respond to the challenge of having a huge fossil fuel industry and its impact on global emissions.

LEAN also believes that Labor needs to better resolve the perceived tension between building a strong economy and protecting the environment. We look forward to our next leader working to resolve this tension and embed environmental values within our core mission.

LEAN encourages you to take the opportunity to have your voice heard in this historic ballot. Irrespective of which candidate is successful, both leadership contenders will be highly influential in setting Labor’s course over the next term of parliament and beyond.

LEAN looks forward to working with both Anthony and Bill to continue to develop and champion good environmental policy for Australia.