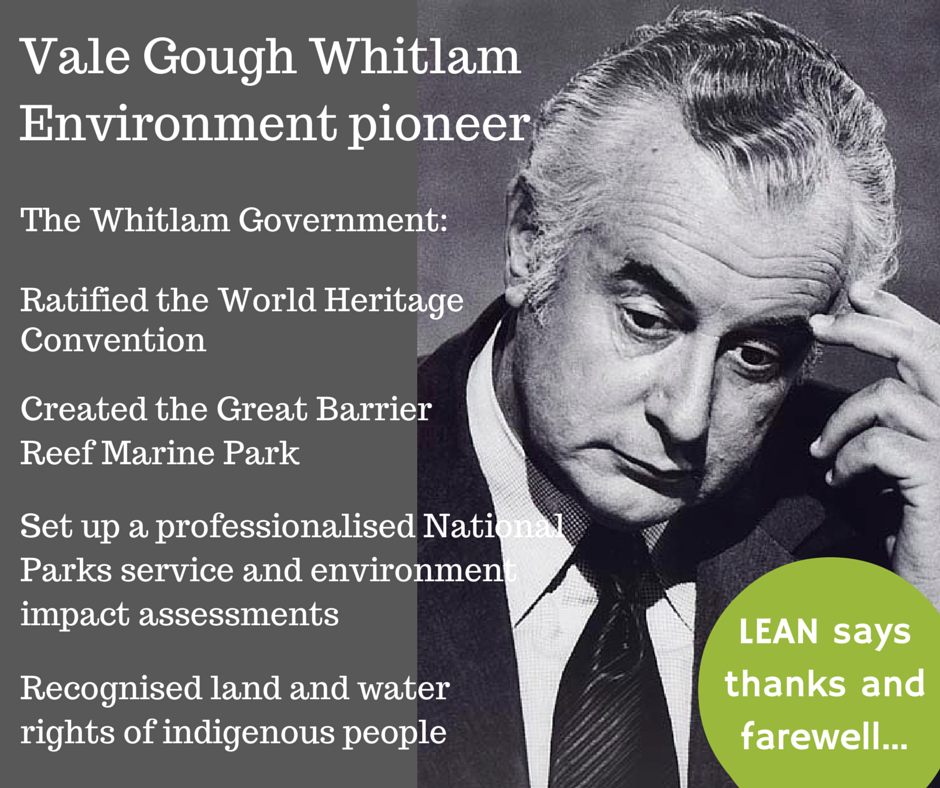 Overnight on October 20 2014 Australia farewelled a pioneer of environmental protection, as well as social justice and progressive reform.

The Whitlam Government was the first to make protection of our natural world a key part of Labor’s values and mission.

Today LEAN fights to protect his legacy, and continue to struggle for environmental and social justice in Australia. So many of the frameworks and concepts that inform Federal environmental laws and protections were pioneered by the Whitlam Government.

In particular we thank Gough Whitlam for his Government’s introduction of the Environment Protection (Impact of Proposals) Act 1974, which required the Commonwealth Government to undertake Environmental Impact Assessments on projects under its control, or undertaken using its funds.

We thank him for ratifying the World Heritage Convention, which gave the federal government a powerful tool with which to defend precious natural or cultural heritage sites such as the Franklin River in 1983.

We thank him for creating the Great Barrier Reef Marine Park. The authority Whitlam created to manage this area has been protecting the biodiversity of this great treasure for decades. Now, in 2014 LEAN, and other environmental activists, are again fighting to protect our reef, from the dangers of climate change and industrial damage.

We thank him for passing the National Parks and Wildlife Conservation Act establishing a professional service to manage national park areas, and plan for the conservation of the sensitive ecosystems and threatened species that they protect.

We thank him for his role in the recognition of the land and water rights held by indigenous Australians as custodians of our beautiful country. His role in returning Wave Hill Station to Vincent Lingiari and the Gurindji people will never be forgotten.

We thank him for joining the international efforts towards protecting the non-human world, including the RAMSAR convention, to ensure protection of wetlands and the biodiversity of their ecosystems, as well as the Convention on International Trade in Endangered Species of Wild Fauna and Flora.

Si monumentum requires, circumspice.  [If you seek his monument, look around you]